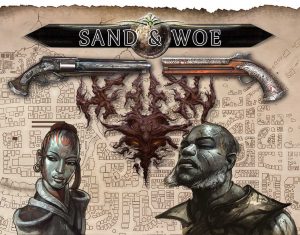 Sand & Woe is the first companion book for Age Past: The Incian Sphere.  It spotlights the Southern geography of the Incian Sphere.  Sand & Woe expands on the lore of this region by including information on its history, cultures, dangers, and mysteries.

Imagine a place where the world itself tries to kill you; where strange magics alter time and the gods favor great beasts.  Imagine a weird town where the rule of law is based not on morals but civility.  In this place ancient creatures rise from primordial times and prowl the desert looking for food.  There is a people who rule the sands, and live in strict caste order, and their queen lives atop a tower where she surveys all she beholds.  In this place the only truly safe haven is in constant political strife with the most powerful republic in the Sphere.  Only the most desperate, fool hearty, and powerful venture toward sand and woe. 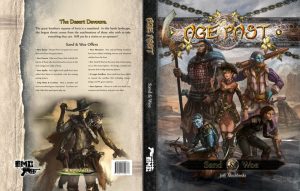